Christmas Giveaway: Your Chance to Win our Tipsters’ £10,000 Betslip

Home Christmas Giveaway: Your Chance to Win our Tipsters’ £10,000 Betslip 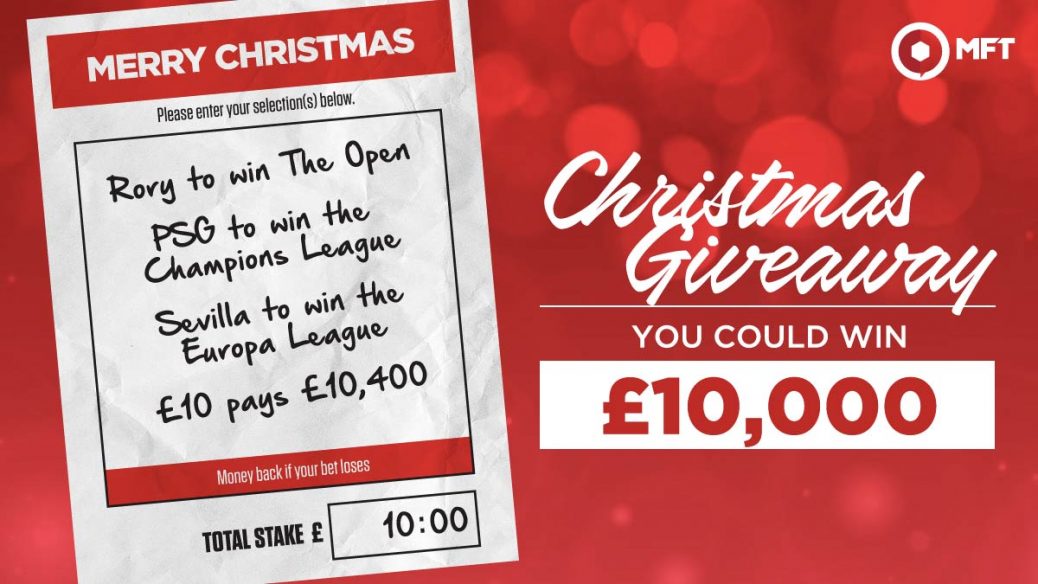 IT'S that time of year again when it's better to give than to receive, right?

As is tradition we're giving members the chance to share some Christmas cheer with our festive giveaway. So for a bit of fun we've tasked three of our top tipsters to give us their best prediction for 2022, then combined them in a treble and placed 10 x £10 bets on their selections.

The Treble they've chosen pays a handsome 1,039/1 with our friends at Ladbrokes. To a £10 stake that's a whopping £10,400 if it lands and you could be the ‘owner' of one of ten betslips that are up for grabs in our Christmas Giveaway.

Find out how to make sure you're included in the prize draw below. We'll announce the ten winners on December 31st, until then here's the picks from The Caddy, Greg MacLean and SlipsTips.

Rory McIlroy to win the Open Championship 12/1 – The Caddy

Who else could I pick for the historic 150th Open Championship than 2014 winner Rory McIlroy.

The four-time major winner would love nothing more than to write his name in to the history books as winner at the iconic home of golf, St. Andrew’s

The Irishman served us well last year when I tipped him at 20/1 to win the Wells Fargo. He followed up that victory with a win at The CJ Cup, 4th at the Olympics, 7th at The US Open, 4th BMW Championship and 6th at the European Tour's grand finale event, the DP World Tour Championship.

Sam Burns is another who I expect will have a successful 2022 but I'm siding with Rory to have another big year and it could be crowned by taking the claret jug home in July.

PSG enjoy a 13-point lead at the half-way stage of the Ligue 1 season so it looks almost a forgone conclusion that they’ll regain their title.

That means they’ll be able to concentrate on finally landing the elusive Champions League title that they crave so much.

Their squad of superstars hasn’t clicked as spectacularly as expected but if they do then they could be unstoppable. They’re certainly capable of beating any side in the world over 90 minutes and have already bloodied the noses of tournament favourites Manchester City when beating them 2-0 in Paris.

Odds of 9/1 are no doubt enhanced by the fact they face Real Madrid in the next round, but if you want to be champions of Europe you’ll need to beat some quality along the way.

Betting on the Europa League outright market is wide open with Borussia Dortmund leading the way. In behind them are a whole host of good, but not great, teams (Barca, Atalanta, West Ham, Napoli, RBL, Leverkusen etc) which could open the door for Sevilla.

The Andalucians have a phenomenal record in this tournament, having won it six times in the last 16 years, indeed the trophy has resided in Spain for over half of this century with Atletico (twice), Valencia and Villarreal adding to he country’s success in the competition.

Sevilla are currently second in La Liga, enjoying a good season domestically and will be driven by the fact the final will be held at their own Ramón Sánchez Pizjuán Stadium in May.

Eight of he last nine finals have been contested by at least one team that has dropped down from the Champions League and a kind draw against Dinamo Zagreb gives them a good chance of making the last 16. From there on in you wouldn’t back against them against any of the clubs remaining.

How to Enter the Draw

Simply leave a comment below saying ‘Merry Christmas' and we'll include you in the draw, which will take place at 6pm on December 31st.

MFT's decision is final on the prize winners and no cash alternative will be offered.